This cross-stones doesn't exist anymore, because of CULTURAL GENOCIDE 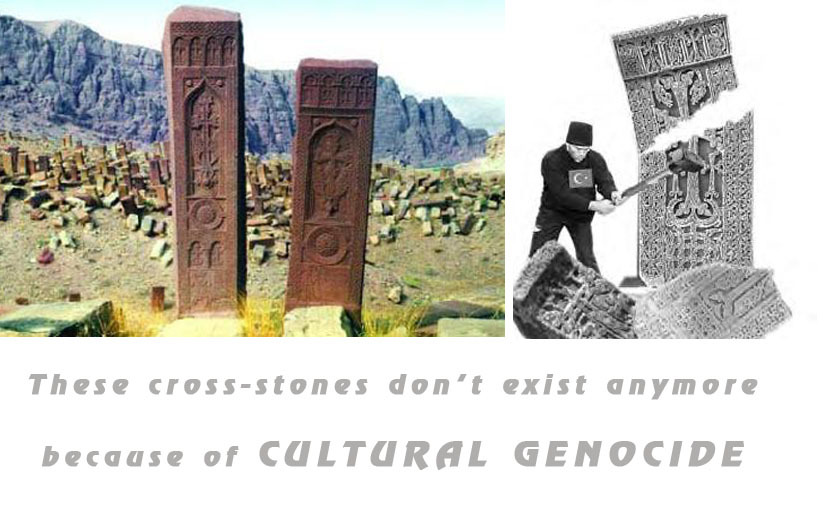 About Cultural Genocide. What is it?

Cultural genocide is a term used to describe the deliberate destruction of the cultural heritage of a people or nation for political, military, religious, ideological, ethnical, or racial reasons.
Relevance to International Law
As early as 1933, Raphael Lemkin proposed a cultural component to genocide, which he called "vandalism".[1] However, the drafters of the 1948 Genocide Convention dropped that concept from their consideration.[2] The legal definition of genocide was confined to acts of physical or biological destruction with intent to destroy a racial, religious, ethnic or national group as such.[3]
Article 7 of the United Nations Draft Declaration on the Rights of Indigenous Peoples (26 August 1994)[4] uses the phrase "cultural genocide" but does not define what it means. The complete article reads as follows:
Indigenous peoples have the collective and individual right not to be subjected to ethnocide and cultural genocide, including prevention of and redress for:
(a) Any action which has the aim or effect of depriving them of their integrity as distinct peoples, or of their cultural values or ethnic identities;
(b) Any action which has the aim or effect of dispossessing them of their lands, territories or resources;
(c) Any form of population transfer which has the aim or effect of violating or undermining any of their rights;
(d) Any form of assimilation or integration by other cultures or ways of life imposed on them by legislative, administrative or other measures;
(e) Any form of propaganda directed against them.
It should be noted that this declaration is only a draft. Were it to pass, it would be a "soft law" instrument and would not present binding legal obligations on UN parties.
Despite its lack of legal currency, the term has acquired rhetorical value as a phrase that is used to protest against the destruction of cultural heritage. It is also often misused as a catchphrase to condemn any destruction the user of the phrase disapproves of, without regard for the criterion of intent to destroy an affected group as such.
Examples of the Term's Usage
Cultural advocates have leveled charges of "cultural genocide" in connection with various events:
* As part of a wider effort to destroy the Polish culture, the Germans during the Second World War closed or destroyed universities, high schools, museums, libraries, and scientific laboratories, and demolished hundreds of monuments to national heroes as a form of cultural genocide. To prevent the birth of a new generation of educated Poles, German officials decreed that the schooling of Polish children should end with elementary education. In a May 1940 memorandum, Heinrich Himmler wrote: "The sole goal of this schooling is to teach them simple arithmetic, nothing above the number 500; writing one's name; and the doctrine that it is divine law to obey the Germans. I do not think that reading is desirable." These efforts well along with general massacres of Polish intelligentsia, such as at Piaśnica Wielka where 12,000 intelligentsia were killed.
* In 2007, a Canadian Member of Parliament criticized the Ministry of Indian Affairs' destruction of documents regarding the treatment of First Nations members as "cultural genocide."[5]
* The destruction by Azerbaijan of thousands of medieval Armenian gravestones at a cemetery-site in Julfa, and Azerbaijan's subsequent denial that the site had ever existed, has been widely written about as being an example of cultural genocide.[6][7]
* When Turkey's Minister of Cultural Affairs opened the Aghtamar church in eastern Anatolia as a museum, critics objected to the use of its Turkified name, seeing in it a denial of the region's Armenian heritage and as a sort of "cultural genocide".[8]

* Some scholars have discussed whether "cultural genocide" properly describes Japan's suppression of Korean language, traditions, and names, and the teaching of Korean history during the Japanese occupation of Korea from 1910 to 1945.[9]
* Some right-wing activists have applied the term to what they see as a downfall of Western civilization due to liberal immigration policies, diversity, and multiculturism.[10][11]
* In March 2008 the Dalai Lama accused China of practising cultural genocide against the peoples of Tibet.[12]
* In South Africa, the Afrikaner community has expressed dismay towards the ANC government's stance on Afrikaner cultures. A particular thorny issue is education, the government favours a dual-medium language system, english-Afrikaans institutions rather than single-medium Afrikaans institutions. The argument of many Afrikaners is that English will eventually dominate and Afrikaans will lose relevance in these respective establishments. Another controversial issue is the renaming of places, streets and monuments in South Africa. In many cases, boer general names are replaced by those of ANC freedom fighters. Similarly the english-speaking white community is affected. Recently, Jan Smuts international airport reverted to becoming Or Thambo international airport. There are also plans to rename Grahamstown (regarded by many as the heartland of anglo-African culture in South Africa) with an indigenous African name.
Source:
Автор: CULTURAL GENOCIDE на 10:24 PM 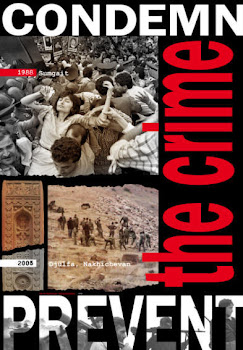 Lost Khachkar from the cemetery in Julfa